Testing a blog post using my new Android! And thought I'd upload a photo of the chillies harvested from the backyard. Photo taken using Android camera phone too. I think I prefer this over blackberry to be honest! 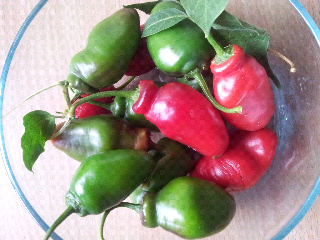 Yes, still excited with the new toy (the Sunbeam Gelateria), I set off in creating ice cold treats, perfect for the weather - good 'ol Melbourne summer. I wanted to make sure that the sorbets generated from this machine will benefit from the the harvests from the garden... Too bad I killed the stevia otherwise I could have skipped adding store bought sugar too... but anyway...

After the successful lemon and mint sorbet, I thought future desserts for entertaining would be best served from the ice cream machine! One Sunday we had some friends over for dinner who really liked their chocolate, so the treat of the night was chocolate inspired. After a little googling of recipes for inspiration, I stumbled upon a chocolate and rosemary sorbet recipe (which is apparently under  the Moroccan desserts department). Curious, I thought I'd give it a go.  A bit risky to serve an untested recipe to guests, but worst case I thought the back up plan would be store bought chocolate ice cream!

It's also very easy to make. All you need are
2 sprigs rosemary, bruised (I just bashed the stems with a pestle)
60g coco powder - I used Cadbury
500ml water

Place all ingredients in a saucepan and simmer until the sugar melts. Bring to a boil for a bout a minute or two, stirring occasionally. Take the pan off the heat and let the rosemary steep into the mixture - I kept tasting every 15minutes just to check for the intensity of the rosemary as I really wasn't sure what to expect! I left both sprigs until the mixture has cooled, took the sprigs off and churned the mixture in the ice cream maker. Done! I served the sorbet with a chocolate bark, simply made by melting 200g of 70% dark chocolate and poured on top of chopped dried apricots, pistachios and sultanas. 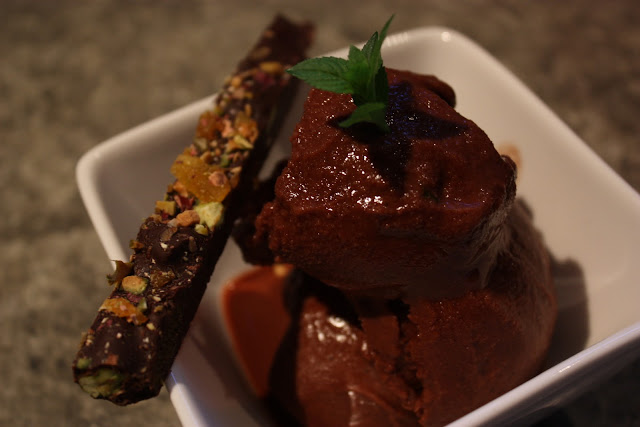 although I probably have to improve my scooping skills to have a more perfectly shaped sorbet!


Meanwhile, the plums in the backyard have been flourishing, and this time around we have been harvesting more than we can consume as the possums cannot take their share - husband has draped bird netting over the plum tree - lesson learned from last year's disaster when the possums raped the tree and only left pips.

Some of the plums were big, some were small and cute, but all of them were tasty. Well, at least to me! 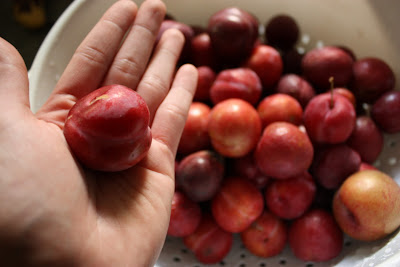 So I took about 800g worth of plum flesh (left the skin on), added the juice and zest of half a HUGE lemon (also from the backyard). The ice cream machine's capacity is 1 litre, and because the mixture will expand, the ingredients are not supposed to exceed 850mls. 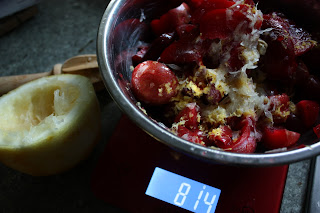 It went into a blender with about 3/4 cup of caster sugar and 2 tablespoons of brown sugar. I really wasn't sure about the final white sugar measurements as I didn't want to add much sugar, and I started with 1/2 cup and just kept adding a touch here and there until I thought about adding brown sugar just for a bit more depth in the sweetness. At this point I was debating as to add any spice... my hands were twitching and itching to reach out into the pantry for something like star anise or aniseed... Then I opened the door of the drinks cabinet... and thought, hmmmm... Ouzo maybe? 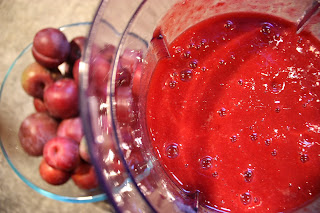 Since alcohol deters freezing, the alcohol had to be added later in the process. After passing the blitzed red mixture through a sieve, it went to the ice cream machine, and then I just stirred in 2 capfuls of Ouzo when it was almost done and placed the mixture into a freezer safe container. 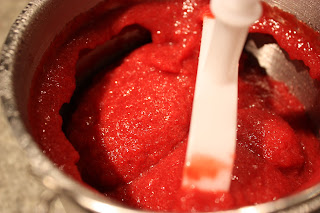 The next concoction is a kaffir lime and lemon verbena sorbet... Twelve bruised kaffir limes, nine leaves from the lemon verbena, 1 dried chili (just to intensify the taste), 1 cup sugar and 2.5 cups of water were boiled and  left to cool to infuse. I find the taste very interesting! 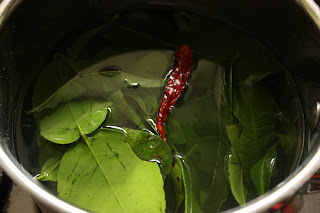 I could keep going for a while so please bear with me as I get a slight obsession with this machine! Still thinking about the next set of flavors to experiment with.... Something along the lines of thyme plus maybe something with alcohol... stay tuned!
Posted by Mae at 1/22/2012 08:50:00 PM No comments:

Email ThisBlogThis!Share to TwitterShare to FacebookShare to Pinterest
Labels: sorbet

Had a surprise guest today at the shower. Unfortunately he had to be put down... 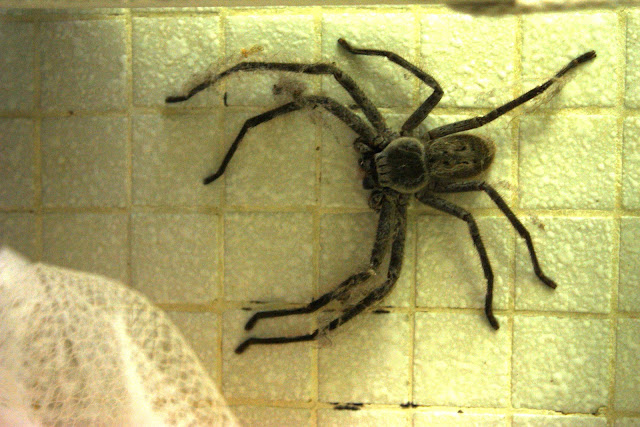 Email ThisBlogThis!Share to TwitterShare to FacebookShare to Pinterest
Labels: photoblogging 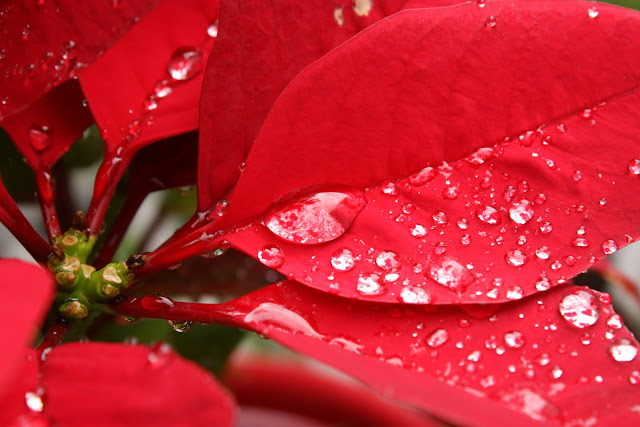 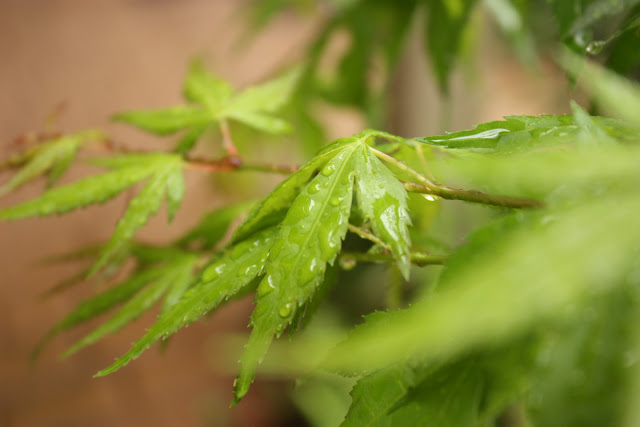 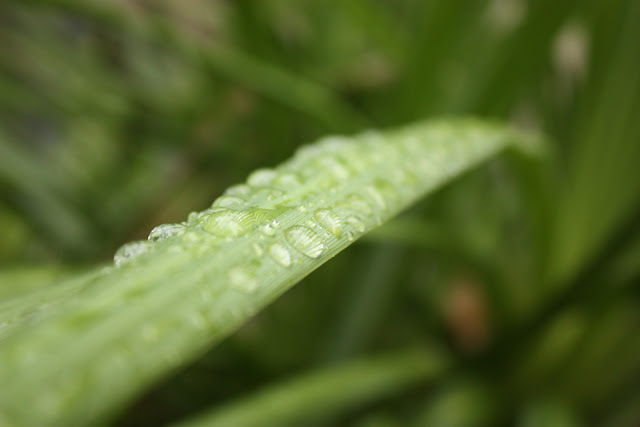 Email ThisBlogThis!Share to TwitterShare to FacebookShare to Pinterest
Labels: photoblogging

So! It's been around 2 months since my last post, and I have a very good reason why I was pre-occupied with something else! Anyway, for the first post for this year I thought I'd show off a little toy, a gift from colleagues. 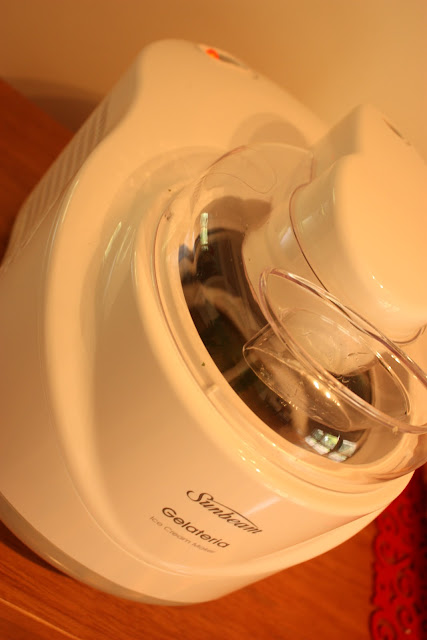 
I've always wanted an ice cream maker and was actually contemplating on getting a Cuisine Art ice cream maker so getting something very similar (if not better!) was much appreciated.

So, of course it had to be tested!

Incidentally there was a bunch of lemons waiting to be picked from the tree. And since it's summer, it's a perfect time to make something refreshing. I made a lemon and mint sorbet! The lemons and mint were freshly picked from the garden on the same day as the sorbet was made. Nothing can be fresher than this! 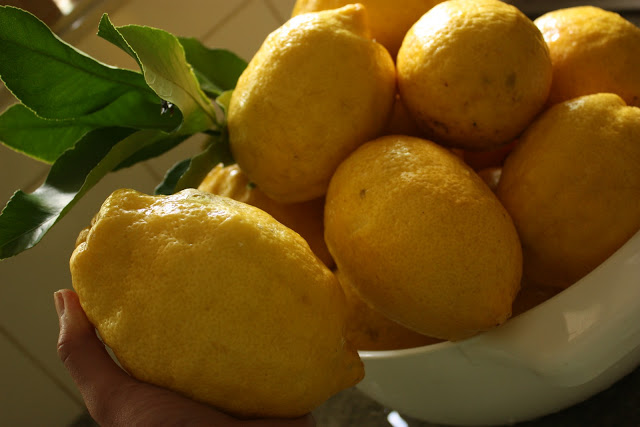 you calling me a lemon? 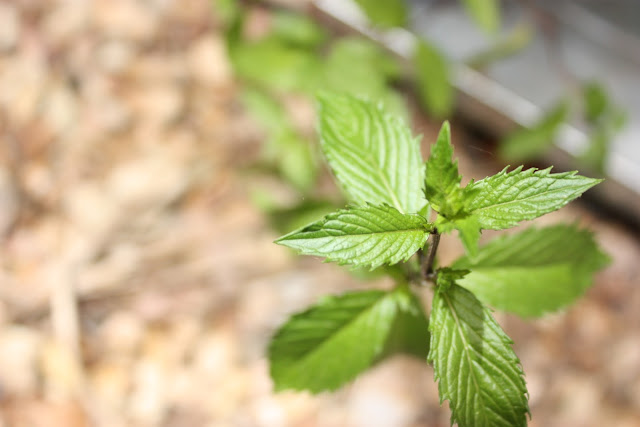 this is actually ginger mint

I followed a basic sugar recipe included in the instruction manual. This has to be made ahead.

Place water and sugar in a small saucepan. Stir over low heat until the sugar dissolves. Bring to the boil and cook for 2 minutes. Remove from heat and allow to cool at room temperature before refrigerating for a few hours or until cold.

Lemon and Mint Sorbet
2 cups lemon juice (around 6 lemons)
zest of 2 lemons
handful of mint, chopped finely (I used some ginger mint as an excuse to pluck some leaves off our plant! and ordinary mint)
1 quantity of sugar syrup

Combine sugar syrup, lemon juice, lemon zest and mint. Cool in fridge for a couple of minutes (this just helps in making the sorbet quicker - just a tip I read from the manual). 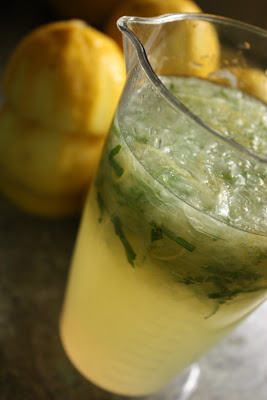 When the mixture has chilled a bit and the gelateria has chilled as well, pour the mixture onto the ice cream maker, start the paddle motor  then sit down and relax for around 35 minutes - check the consistency after around 35 minutes, if you think it's good enough you can stop it, or check when the paddle has started moving the opposite direction. Otherwise just increase the time. 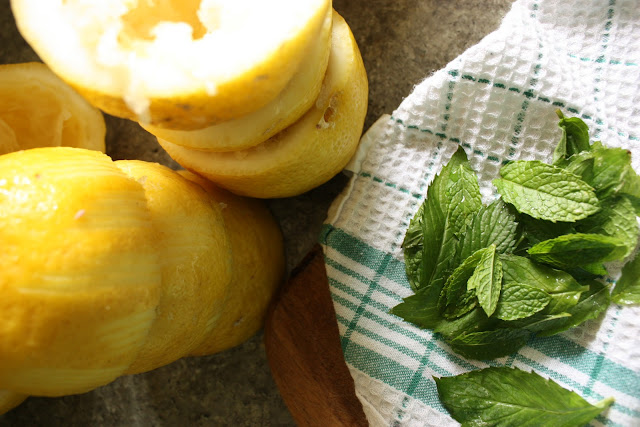 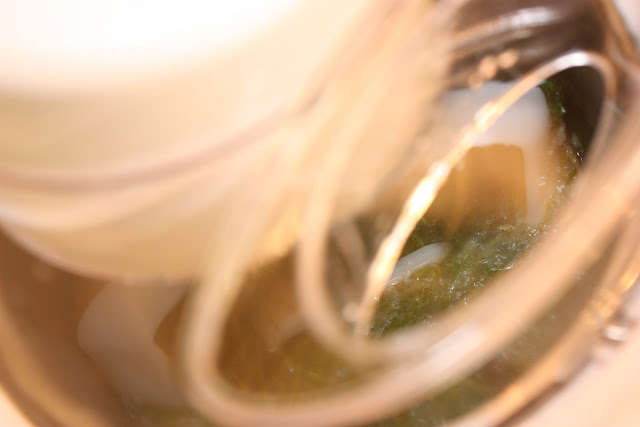 whip it, whip it 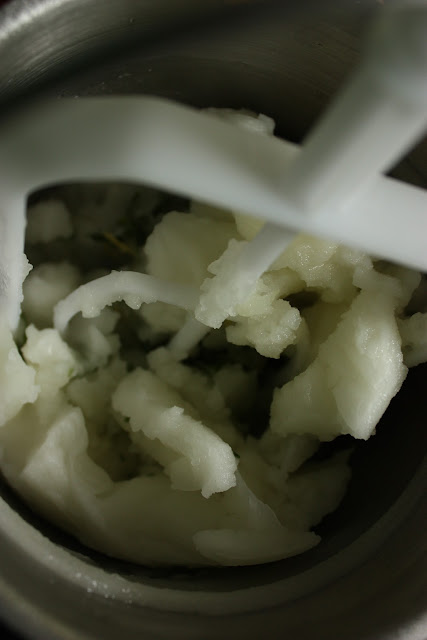 Transfer the mixture using a spatula or wooden spoon onto a freezer safe container and let sit in the freezer for a couple of hours. 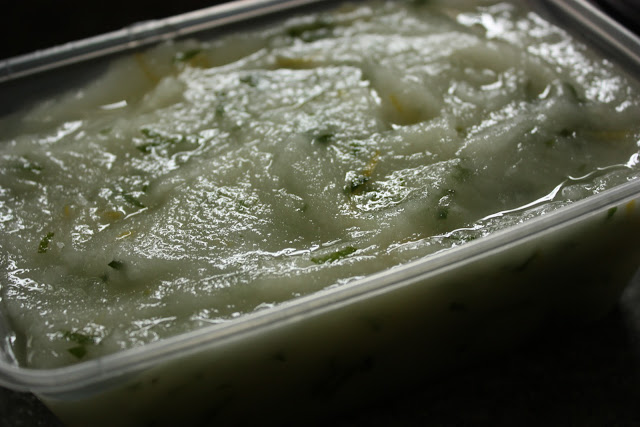 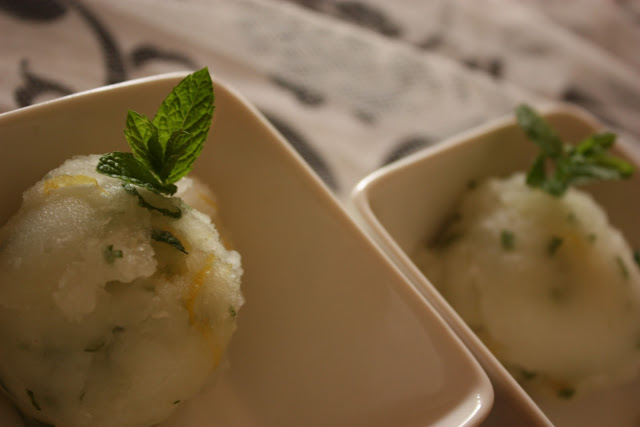 it was awesome - zesty, citrusy and not too sweet!

It's great to make chilled desserts ahead of time - perfect for summer treats! (Next time I will also have some sugar syrup on standby in the fridge!)
Posted by Mae at 1/08/2012 07:27:00 PM No comments: 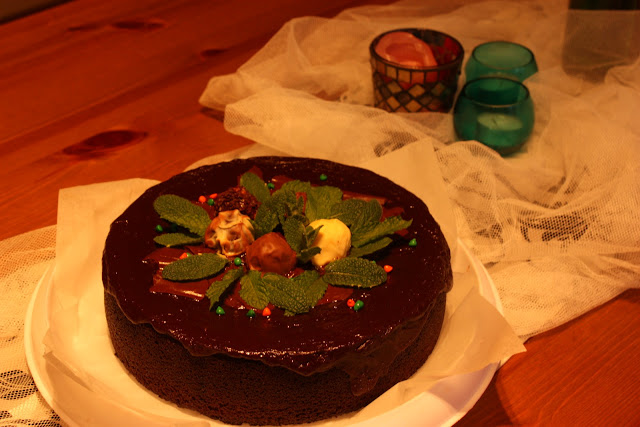 Just a different take on the chocolate and guinness cake, which I've done several times - the cake base always turns out to be a winner, so the variety is really just in the cake decoration, or additional flavor... like this one's top was brushed with coffee liquer then  topped with ganache and decorated with fresh apple mint and mint leaves. And tiny little pieces of colored chocolate. Made with eggs from a colleagues' chooks too!
Posted by Mae at 11/13/2011 09:13:00 PM No comments: 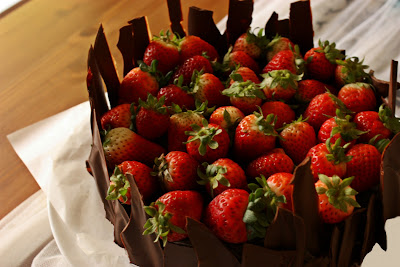 We had a previous celebration a week ago where a friend of ours celebrated their 15th anniversary together. Now this called for a celebration cake - and having downloaded Donna Hay's latest iPad magazine app featuring celebration cakes, it wasn't very difficult to find a recipe from the list, based on the ingredients that I have.
The winner was a black forest cake. The recipe was meant to be for smaller, semi individual serves. However I didn't have the smaller cake tins, so I thought I'd dish out the same amount but use a 12" springform tin instead. And because I didn't have fresh cherries at hand, I had to decorate the top with strawberries, which are  widely available this time of the year. I did use tinned cherries, which was covered with the cake batter, before baking.

Melt 300g of 75% dark chocolate (either bain marie, or microwave) and spread over one piece of baking paper. Leave a couple of centimetres away from the edge. 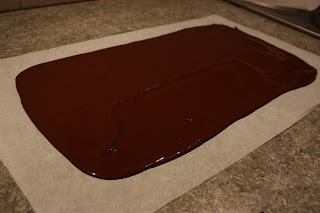 Place the other sheet of baking paper on top and smooth it out to remove air bubbles. 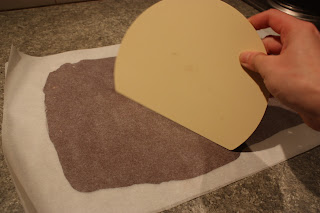 Roll it out and put in the fridge to set. I used a rolling pin to make it easier although the instructions didn't say so! 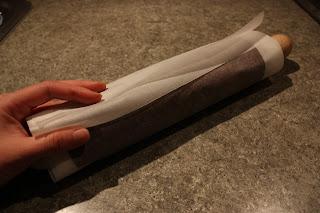 When set (maybe an hour or 2 to be sure) hold one end of the bottom baking paper and unroll  the top part. This will create the shards. 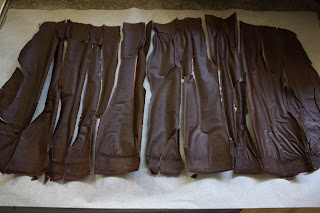